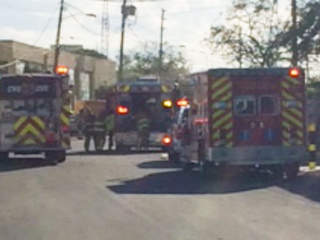 WEST PALM BEACH, Fla. - An employee of Grand Illusions of the Palm Beaches, a custom-cabinet maker in West Palm Beach, received minor first- and second-degree burns as consequence of an electrical fire in the room where the cabinets are painted, said Allan Ortman, spokesman for West Palm Beach Fire Department.

The employee, whose gender and name were not released, was treated at the scene, Ortman said.

The blaze started in the electrical system of one of the fans in the paint room and was confined to that area of the business.

The fire has been extinguished and Elizabeth Avenue at Roebuck Court have reopened.

Emergency call out this morning in Cabinteely