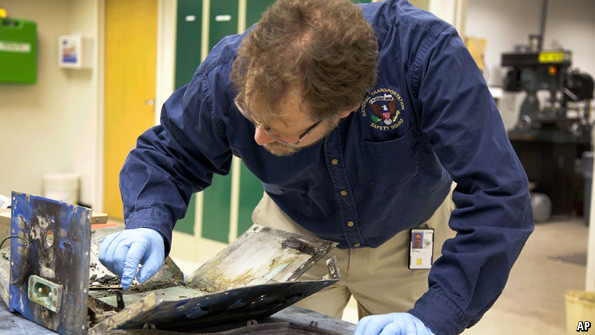 IN THE past year rechargeable batteries containing the element lithium have been in the headlines for all the wrong reasons. Investigators in Japan are investigating why a lithium-ion battery overheated on a Boeing 787 Dreamliner at Narita airport. Last year Boeing grounded its entire fleet of the next-generation plane after the lithium batteries on two of the aircraft caught fire. (The 787s returned to the air after being fitted with a modified system to protect the aircraft against battery fires.) Tesla, a maker of electric cars, performed a remote software update to its Model S luxury cars after two fires, which were blamed on road debris damaging the undertray containing the vehicles' lithium batteries. Lithium batteries are widely used because of their high energy density: in other words, their ability to store a lot of energy in a lightweight, compact form. But they have a tendency to cause expensive machinery to go up in smoke.

This is not a new phenomenon, and fortunately it is also a rare one. In 2006 millions of lithium-ion battery packs made by Sony were replaced after several hundred overheated and a few caught fire. These batteries were used in laptop computers produced by a number of

All battery chargers should be unplugged when not in use or required.