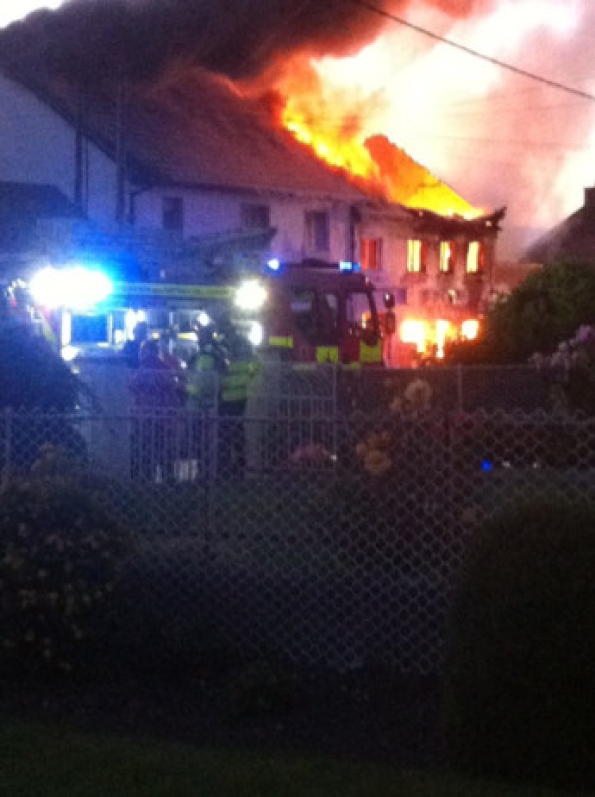 A fire which ripped through Kilmaganny Post Office on Friday evening gutted the building and has left the local community without vital services.

The blaze broke out shortly after 7.30pm on Friday night and it took several hours for units of the fire brigade to bring the fire under contol. Eight units attended the scene and fire officers remained at the scene on Saturday to ensure that the fire was fully quenched. Nearby houses were also sprayed down with water as a safety precaution as falling debris landed on the street.

The post office is an integral part of village life and served a wide catchment area including Dunnamaggin, Windgap, Hugginstown and Tullahought. In recent years with rural post office closures it provided a lifeline for many living in the surrounding villages where post offices were sadly forced to close.

Cllr Matt Doran (Fianna Fail) said that the entire community was devastated but pointed out that the goodwill and outpouring of support since the fire has been overwhelming.

Demolition work started on the building, which served as a post office since 1963 was yesterday (Tuesday).

82-year-old Joan Geraghty who served as postmistress in the village for several years lived in the building and was present when the fire broke out. Fortunately she managed to escape uninjured and no one was injured in the incident. Insurance assessors confirmed over the weekend that an electrical fault was the most likely cause of the fire. The post office is run by Mrs Geraghty’s daughter Jackie Kenneally. “In the interim we are hoping to find a temporary solution. We have had several offers from people who are willing to let us use their premises and we have been inudated with people trying to help. The goodwill shown in recent days has been nothing short of incredible,” added Mr Doran.